£40 a Week to Build Qatar's World Cup Stadiums - FreedomUnited.org
This website uses cookies to improve your experience. We'll assume you're ok with this, but you can opt-out if you wish.Accept Read More
Skip to content
Back to Global News 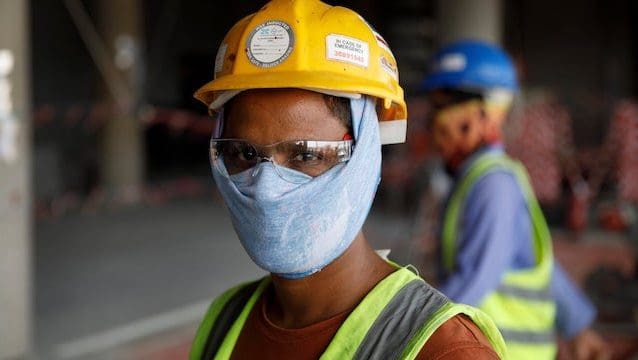 Qatar is the world’s wealthiest per capita state, but many migrant workers building grand World Cup stadiums in preparation for 2022 are only receiving £40 a week.

The Guardian spoke with several construction workers from Ghana to understand how they came to work in Qatar and how working conditions have changed — or not changed — under Qatar’s promises of reform.

Following global pressure from human rights organizations and media investigations, Qatar has embarked on reforms to how it treats migrant construction workers. On a tour led by Qatar’s supreme committee, which is overseeing stadium construction, journalists learned about improved safety training, mandatory breaks during excessive heat, and canteens filled with electrolyte-rich water for workers. All signs were in English, Hindi, and Tamil, and there was even a confidential grievance hotline.

It seemed like all had been fixed, until the workers sat down with The Guardian:

So when I finally sat down to talk to the workers, I was almost ready for them to say they could hardly be happier. Aged between 28 and 38, all married with at least one child, they acknowledged that the camp was decent; they had Ghanaian friends in other camps which were dirty, and had no food or amenities. Then they started to talk about the pay.

“It is hard to be away for so long,” one said. “Sometimes the family want to have you in their midst – and you may not have money to send them. We were supposed to earn something big – but we earn small.”

Asked how much, one of them opened his eyes wide in exasperation, and said: “650 a month basic salary.”

For building one of the prestige stadiums designed so Qatar can dazzle the world in 2022, eight hours a day, six days a week, this is £140: a little under £35 per week; £5 per day.

Still, Houtan Homayounpour, head of the ILO’s Qatar project office, says that clear progress is being made and that one cannot expect things to change overnight. He pointed to the abolition of the rule that workers get an exit permit from their employers in order to leave the country, as well as settlement committees for workers’ disputes, legal protections for domestic workers, and a commitment to ending the notorious “kafala” system.

The supreme committee appeared to not see issues with low wages, however, stressing that what they earn in Qatar is still better than anything they could make back home.

But not all migrant workers have been able to earn even these meager wages. When a journalist from The Guardian spoke to Bangladeshi men living outside of designated camps, they told him “people are working but not being paid. There is no work, or very low pay.”

One man said his wife criticized him for going to Qatar because he couldn’t send any money home to support his family — unlike rickshaw drivers in his village.

The 2022 World Cup, as The Guardian writes, is “inescapably, a World Cup of inequality, hosted by the per capita wealthiest country, built by men from the poorest.”