Life Interrupted: Trafficking into Forced Labor in the United States - FreedomUnited.org
This website uses cookies to improve your experience. We'll assume you're ok with this, but you can opt-out if you wish.Accept Read More
Skip to content 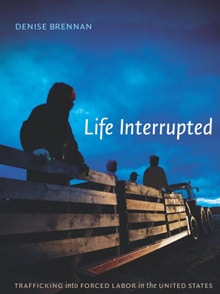 Life Interrupted introduces us to survivors of human trafficking who are struggling to get by and make homes for themselves in the United States. Having spent nearly a decade following the lives of formerly trafficked men and women, Denise Brennan recounts in close detail their flight from their abusers and their courageous efforts to rebuild their lives. At once scholarly and accessible, her book links these firsthand accounts to global economic inequities and under-regulated and unprotected workplaces that routinely exploit migrant laborers in the United States. Brennan contends that today’s punitive immigration policies undermine efforts to fight trafficking. While many believe trafficking happens only in the sex trade, Brennan shows that across low-wage labor sectors—in fields, in factories, and on construction sites—widespread exploitation can lead to and conceal forced labor. Life Interrupted is a riveting account of life in and after trafficking and a forceful call for meaningful immigration and labor reform.