Human Trafficking Around the World: Hidden in Plain Sight - FreedomUnited.org
This website uses cookies to improve your experience. We'll assume you're ok with this, but you can opt-out if you wish.Accept Read More
Skip to content 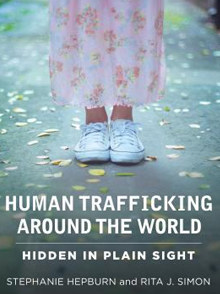 Hepburn and Simon recount the lives of victims during and after their experience with trafficking, and they follow the activities of traffickers before capture and their outcomes after sentencing. Each chapter centers on the trafficking practices and anti-trafficking measures of a single country: Australia, Brazil, Canada, Chile, China, Colombia, France, Germany, India, Iran, Iraq, Israel, Italy, Japan, Mexico, Niger, Poland, Russia, South Africa, Syria, Thailand, the United Arab Emirates, the United Kingdom, and the United States. Examining these nations’ laws, Hepburn and Simon reveal gaps in legislation and enforcement and outline the cultural norms and biases, societal assumptions, and conflicting policies that make trafficking scenarios so pervasive and resilient. This study points out those most vulnerable in each nation and the specific cultural, economic, environmental, and geopolitical factors that contribute to each nation’s trafficking issues. Furthermore, the study also highlights common phenomena that governments and international anti-traffickers should consider in their fight against this illicit trade.