Lift the Ban MP action - FreedomUnited.org
This website uses cookies to improve your experience. We'll assume you're ok with this, but you can opt-out if you wish.Accept Read More
Skip to content

Ask your MP to support calls to Lift the Ban! 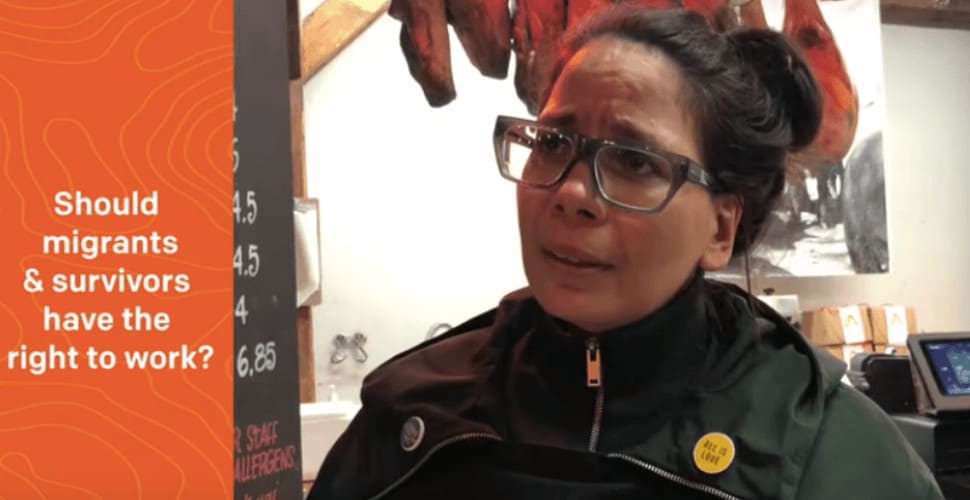 Watch people on the streets of London share their thoughts on granting people seeking asylum the right to work.

Instead of focusing on their recovery, the current UK system means after leaving situations of modern slavery, some victims go on to be exploited again. This is because their only option is to seek asylum in the UK, which prevents them from working and moving forward with their lives.

We are already campaigning to urge the government to introduce a new law to guarantee support for 12 months but in the meantime, victims of modern slavery going through the asylum system are at risk of being retrafficked and exploited in conditions of modern slavery by unscrupulous employers who use victims’ precarious immigration status and threats of reporting them to the authorities as a means of control.

That’s why we’ve joined a coalition of organizations asking the UK government to allow people seeking asylum the right to work, empowering victims to be independent and able to focus on recovery ­– instead of relying on the meager government subsistence payment of £39.60 per week.

In 2019, the UK government dropped its target of issuing initial decisions on claims within six months.1 Today, only one third of asylum applications receive an initial decision within one year.2

During this time, not being allowed to work and forced to rely on government support of just £5.65 per day to survive leaves people seeking asylum vulnerable to exploitation.

After a person has waited over a year for their asylum status, they can apply for the right to work but even in these cases, individuals are restricted to seeking employment from the Government’s Shortage Occupation List. Highly-skilled professional jobs on this list including ‘classical ballet dancer’ and ‘nuclear medicine practitioner’ means that for most people seeking asylum it’s impossible to find jobs they qualify for.3

For victims of trafficking who are seeking asylum on the basis that it is not safe to return to their country of origin, the inability to work and no legal means to adequate financial support can seriously impact their chances of recovery and can even lead to being retrafficked.

Traffickers use this vulnerability and fear of being reported to authorities to trap people in exploitative work conditions and forms the basis on which they are able to exploit workers in forced labor through withholding wages, abuse, threats and restricting a persons’ movement. Few cases are ever reported to the police because of fear of deportation.

Tino met a contact at his church who managed to find him work on a construction site. Tino worked hard for no pay and eventually confronted the site manager to demand his wages only to find that Tino’s contact had been paid – not Tino himself.

Tino said “So when he found out that… I am the one who contact that company then he was now threatening me… Saying he’s going to get me, he’s going to tell the Home Office that I’ve been working illegally when I’m not allowed to be working.”4

Pascual worked in poultry processing and described his experience, “We keep quiet, we didn’t say anything, they told us the first week the system in Britain no pay. So we will pay you the following week and we accepted … every day we keep doing the same job and it’s not easy job because this is a killing, killing the body. Plenty, plenty chickens imagine per minute you have to pack it very quick otherwise them, they come and shout at you as well if you not doing very well.”5

Together we can show the UK that we support survivors of modern slavery and that they should grant people seeking asylum the right to work and live in dignity.

Watch Catherine name lots of reasons why the UK should lift the ban in just one minute!

These people are not criminal. They are migrants. Huge difference. They deserve to

Sadly, refusing to allow refugees to work is part of the ‘hostile environment ‘ that Patel and Johnson maintain. By forcing asylum seekers to exist on pitiful handouts and suffer the humiliation of poverty they hope to deter further migration. The strategy closely resembles that of the 19th Century Workhouse system where those who were truly desperate were forced to endure the most painful and humiliating circumstances in order to dissuade others from wanting to enter the ‘Bastilles’.

Ask your MP to support calls to Lift the Ban!

I am writing as a constituent who believes that people seeking asylum in the UK should be treated with dignity. Many people in the asylum system are forced to wait months and often years for a decision on their asylum claim, and I believe it is crucial that those people are granted permission to work so they are able to support themselves and avoid destitution while living here.

For survivors of trafficking who are seeking asylum on the basis that it is not safe to return to their country of origin, the inability to work and no legal means to adequate financial support can seriously impact their chances of recovery.

The Lift the Ban campaign, is calling for the right to work be granted to asylum seekers and their adult dependants after six months of having lodged an asylum claim or further submission, unconstrained by the Shortage Occupation List.

The Lift the Ban campaign has shown that the policy is supported by 81% of the UK public, and would:

Despite all this, the Home Office has had the policy under review since December 2018, with no end in sight. As a constituent, I’m asking whether you will support this important campaign and write to the Home Secretary to call for urgent reform.